Asian shares fall on worries about Pelosi’s visit to Taiwan

Asian shares fall on worries about Pelosi’s visit to Taiwan 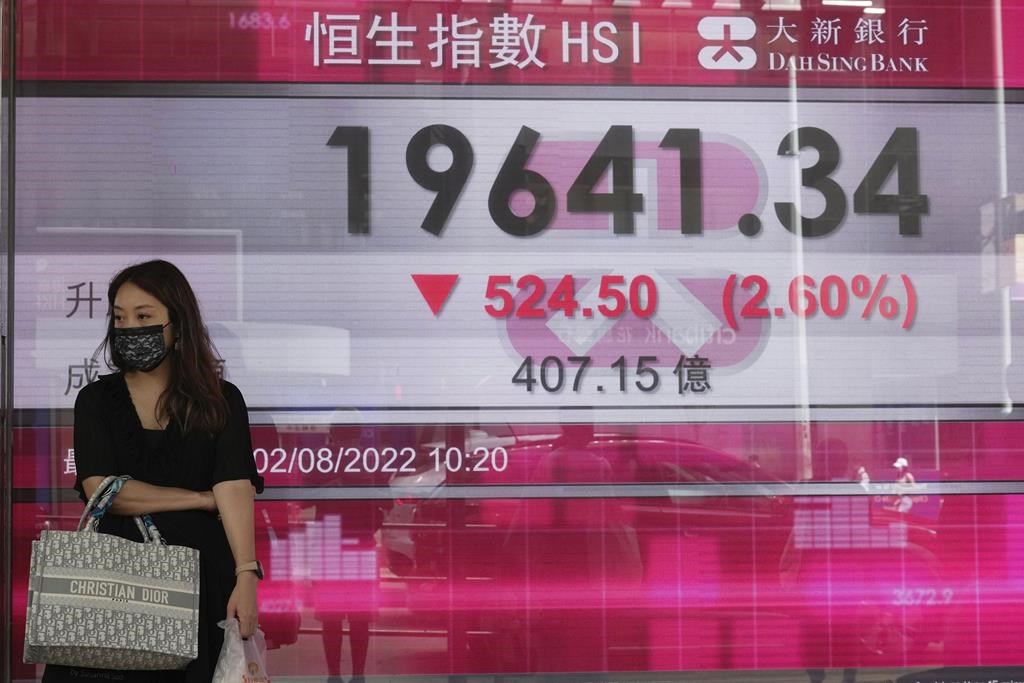 Benchmarks headed downward across the board in the region in early trading, including Japan, China, South Korea and Australia.

China sees Taiwan as its own territory and has repeatedly warned of “serious consequences” if the reported trip to the island democracy goes ahead. Pelosi has said she is visiting Singapore, Malaysia, South Korea and Japan for talks on a variety of topics, including trade, COVID-19, climate change and security.

While there have been no official announcements, local media in Taiwan reported Pelosi will arrive Tuesday night, making her the highest-ranking elected U.S. official to visit in more than 25 years.

“Risk sentiment took a hit following reports suggesting U.S. House Speaker Pelosi is to go ahead with her visit to Taiwan. Investors are likely to be looking for defensive positions as the geopolitical situation could escalate over the next few days,” said Anderson Alves of ActivTrades.

“The first big relief point will be Pelosi’s safe arrival in Taiwan, followed by her safe departure. No party wants a real war, but the risk of mishap or even aggressive war game escalation is real, which could always lead to a tactical mistake,” Stephen Innes, managing partner at SPI Asset Management said.

The Reserve Bank of Australia on Tuesday boosted its benchmark interest rate for a fourth consecutive month to a six-year high of 1.85%. It was the third consecutive hike of half a percentage point. When the central bank lifted the rate by a quarter percentage point at its monthly board meeting in May, it was the first rate hike in more than 11 years.

Bond yields mostly fell. The yield on the 10-year Treasury, which influences mortgage rates, fell to 2.60% from 2.65% late Friday.

August’s subdued opening follows a solid rally for stocks last month: July was the best month for the S&P 500 index since November 2020. Stocks have been falling for much of the year as investors worry about high inflation and rising interest rates. A key concern remains whether central banks will raise interest rates too aggressively and push economies into a recession.

A report last week showed that the U.S. economy contracted last quarter and could be in a recession. Stocks’ recent rally came as worrisome economic reports gave some investors confidence that the Fed can dial back its aggressive pace of rate hikes sooner than expected.

More than half of the companies in the S&P 500 have reported their latest earnings results, which have been mostly better than expected. Many companies have also warned that inflation is hurting consumer spending and squeezing operations. Businesses have been raising prices to try to keep up profits.

Wall Street will also get several updates on the job market, which has remained strong. The Labor Department will release its June survey on job openings and labor turnover on Tuesday and its closely-watched monthly employment report for July on Friday.

A surge in oil prices throughout the year only worsened the impact from inflation. U.S. crude oil prices are up roughly 25% in 2022 and that has raised gasoline prices in the U.S. to record levels.

In energy trading, benchmark U.S. crude lost 5 cents to $93.84 a barrel in electronic trading on the New York Mercantile Exchange. Brent crude, the international standard, fell 13 cents to $99.90 a barrel.