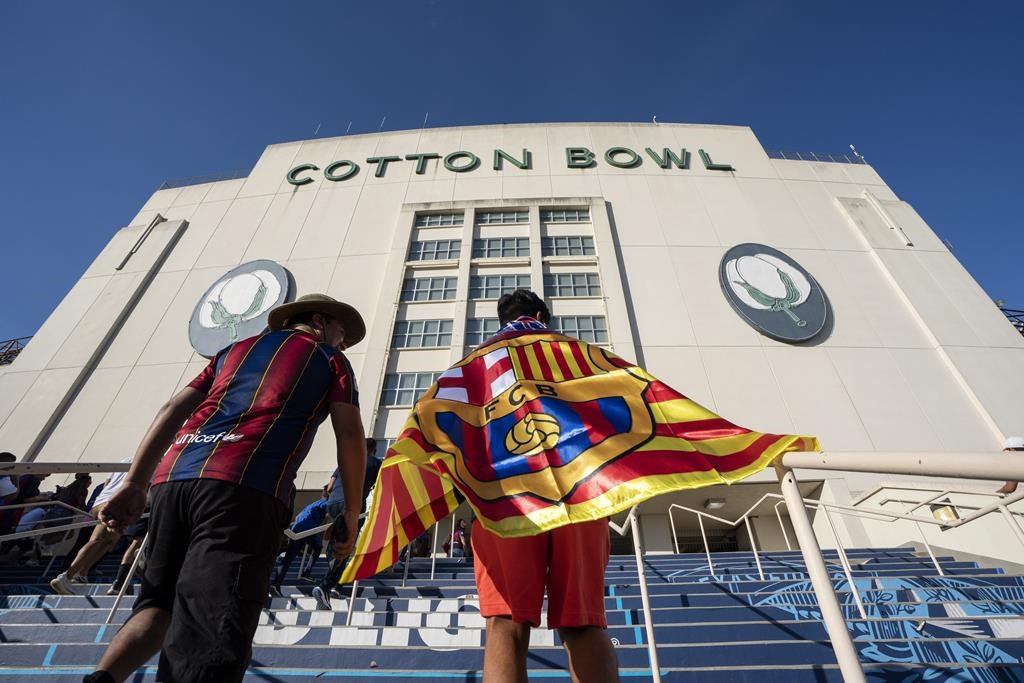 BARCELONA, Spain (AP) — Crippled by debt and fielding a team that was no longer among Europe’s elite, Barcelona’s leadership decided there was only one alternative after watching Real Madrid sweep up the major trophies last season.

Barcelona will enter the season with immediate hopes of winning after adding striker Robert Lewandowski, defender Jules Koundé and winger Raphinha to an uneven squad composed of promising youngsters and several unwanted players.

But the three signings for more than a combined 160 million euros ($163 million) — making it Europe’s leading spender of the offseason — have come at an even larger cost that will burden the club for the next quarter century.

With Barcelona about to close last season with a financial loss for the fourth straight year and no money to spend on transfers, club president Joan Laporta took the gamble that the only way to save the team and stave off its seemingly unstoppable slide into mediocrity was to mortgage its future.

After receiving the approval of Barcelona’s club members, Laporta’s board sold off 25% of its Spanish league TV rights for the next 25 years for 667 million euros ($679 million). The club quickly used that cash to make its splash in the transfer market.

“It’s true that I would have preferred not to have had to sell a percentage of the TV rights,” Laporta said this week from New York, where Barcelona completed its preseason tour of the United States. “But the situation was complicated and required us to be brave and take decisions, because soccer does not wait for anyone and our fans, who are used to winning, deserve a Barça that can compete.”

The Catalan club’s shopping spree may not be over. It sold a 25% stake of its Barça Studios production hub for another 100 million euros ($102 million) on Monday.

The club has pledged a third of that much-needed income to new players, a third to savings, and a third to paying off debt that despite efforts to bring it down still stands at 1 billion euros ($1 billion).

The sacrifice of future revenue comes after Barcelona sold the naming rights of Camp Nou. Europe’s largest soccer stadium will bear the name of audio-streaming service Spotify, as will Barcelona’s shirts at the season opener against Rayo Vallecano on Aug. 13.

Laporta, who inherited a debt-ridden club when he returned to power last year, has also remained a firm backer of Madrid president Florentino Pérez’s scheme to establish a Super League.

But not even the Spotify deal and shedding the salaries of Lionel Messi, Luis Suárez, Philippe Coutinho and Antoine Griezmann for practically nothing in return in recent years proved enough to balance the books.

The mismanagement by previous president Josep Bartomeu, combined with the impact of the COVID-19 pandemic, left the club saddled with a massive debt of more than 1.3 billion euros ($1.3 billion) and the largest payroll in soccer.

Barcelona’s financial difficulties have, predictably, been accompanied by its team’s fall from grace.

Barcelona hasn’t won the league title in three seasons, after having won eight of the previous 11. The team hasn’t lifted the European Cup since 2015, when it won the Champions League for the fourth time in a decade. It won nothing last season after Messi left for Paris Saint-Germain.

All told, the once mighty Barcelona has become known for its economic mess, scandals involving Bartomeu despite his denials of wrongdoing, its inability to retain Messi, as well as humiliating defeats, including a historic 8-2 loss to Bayern Munich.

For Laporta’s critics, it was fitting that Barcelona announced the sale of its second package of TV rights while the team was training in Las Vegas ahead of its friendly “clásico” against Madrid, which Barcelona won 1-0. For some, like former England player Gary Neville, auctioning off TV rights smacked of going for broke.

“Barcelona still pursuing the Super League? This is why! A desperate club (1.2 billion pounds) in debt selling future revenue streams to spend on players today in the ‘Hope’ it pays off! Rolling the dice stuff this with a giant of a club,” Neville wrote on Twitter.

Laporta argues that he had no choice: The alternative was only more losing, fewer fans and dwindling income.

Pressing home the need for the unprecedented measures in June, Laporta told fellow club members that when he took charge after winning club elections in March 2021 the team was nearly bankrupt.

“We couldn’t meet the payroll. We were clinically dead. We restructured the debt, reduced spending and slashed the player payroll substantially, but it still was not enough,” Laporta said. “By finding new revenues and sponsors we went from being dead to the intensive care unit, and now we can finally get back to living a normal life (after selling the TV rights).”

Still, even in the most favorable analysis, the decision is painful.

“From a financial point of view, it is never good news when you sell assets,” economist Marc Ciria, who in 2015 formed part of an unsuccessful presidential run by Laporta but now has no connection to the executive, told The Associated Press.

“Barcelona has spent (nearly) 125 years acquiring patrimony, and TV rights are one of the few assets that is guaranteed to increase in value. But it is also clear that Barcelona, for its status, cannot afford to have another season like the last one.”

Ciria calculates that, not even including inflation, Barcelona has sacrificed at least 1 billion euros ($1 billion), starting with 41 million euros ($42 million) this season, in future TV revenues in exchange of 670 million euros ($684 million) now.

But, for Ciria, the greatest threat to the sustainability of Barcelona is the bloated player salaries. He calculates that just to break even this season the club would need to reduce its salary load to 450 million euros ($457 million). It stood at 518 million euros ($526 million) before the latest signings, which also include free agents Franck Kessie and Andreas Christensen.

Barcelona is also under pressure to reduce its salary load so it can meet the Spanish league’s financial rules and be able to register its new players so they can play games.

Dani Alves, Adama Traoré and Luuk de Jong have all left after finishing their deals, but of its players under contract it has an agreement to transfer Óscar Mingueza to Celta Vigo and has loaned out Clement Lenglet and Francisco Trincão.

Barcelona wants Frenkie de Jong to accept a transfer to Manchester United or take a pay cut. Martin Braithwaite, Samuel Umtiti, and Riqui Puig were all left off Barcelona’s squad for the trip to the United States and the club wants them gone.

Last season, Barcelona flopped out of the Champions League’s group phase for the first time in two decades. It finished a distant second in Spain to Madrid, which also won the European Cup to only increase the frustration of Barcelona supporters.

The additions of a world-class scorer in Lewandowski, a top young center back in Koundé and the flare of Raphinha should provide coach Xavi Hernández with what he needs to improve a squad featuring Spain midfielders Pedri González (19 years old) and Gavi Páez (17).

But one year after Messi’s wife handed him a tissue as he wept while saying farewell to the club he helped make great, Barcelona is at a crossroads where it appears the only two ways forward are renewal or decline.