Kansas first state to vote on abortion since Roe’s demise

Kansas first state to vote on abortion since Roe’s demise 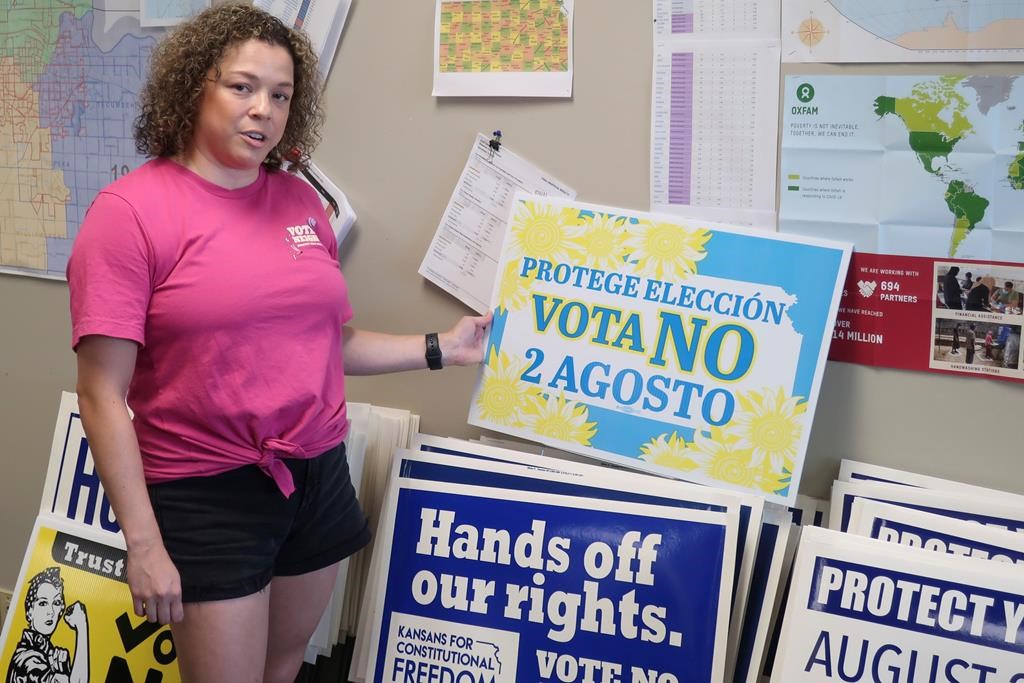 TOPEKA, Kan. (AP) — Kansas on Tuesday will hold the nation’s first test of voter feelings about the recent Supreme Court decision overturning Roe v. Wade, with people throughout the state deciding whether to allow their conservative Legislature to further restrict or ban abortion.

The referendum on the proposed anti-abortion amendment to the Kansas Constitution is being closely watched as a barometer of liberal and moderate voters’ anger over the June ruling overturning the nationwide right to abortion. But the outcome might not reflect broader sentiments about the issue in the country as a whole, given how conservative Kansas is and how twice as many Republicans as Democrats have voted in its August primaries over the past decade.

Supporters of the measure wouldn’t say before the vote whether they intend to pursue a ban if it passes, but they’ve spent decades pushing for new restrictions on a nearly annual basis and many other states in the Midwest and South have banned abortion in recent weeks. By not stating their position, they were seeking to win over voters who favored some restrictions but not an outright ban.

Abortion rights advocates expect the Legislature to ban abortion if the ballot measure passes, and the state saw a surge in early voting with an electorate more Democratic than usual.

“At what level does the insanity stop?” said Eric Sheffler, a 60-year-old retired Army officer and Democrat who cast a “no” vote early in the Kansas City suburbs. “What will they try to control next?”

The Kansas measure would add language to the state constitution saying that it doesn’t grant a right to abortion, which would allow lawmakers to regulate it as they see fit. Kentucky will vote in November on adding similar language to its constitution.

Meanwhile, Vermont will decide in November whether to add an abortion rights provision to its constitution. A similar question is likely headed to the November ballot in Michigan.

The Kansas measure is a response to a state Supreme Court decision in 2019 declaring that access to abortion is a matter of bodily autonomy and a “fundamental” right under the state’s Bill of Rights.

Both sides together have spent more than $14 million on their campaigns. Abortion providers and abortion rights groups were key donors for the “no” side, while Catholic dioceses heavily funded the “yes” campaign.

“I just feel like people have become so nonchalant about abortion, like it’s just another method of birth control,” said Michelle Mulford, a 50-year-old Kansas City-area teacher and Republican who voted early for the proposed amendment, adding that she supports exceptions to an abortion ban for cases of rape, incest or life-threatening pregnancies.

Even though some early voters favor banning nearly all abortions, the vote yes campaign pitched its measure as a way to restore lawmakers’ power to set “reasonable” abortion limits and preserve existing restrictions.

Kansas doesn’t ban most abortions until the 22nd week of pregnancy. But a law that would prohibit the most common second-trimester procedure and another that would set special health regulations for abortion providers remain on hold because of legal challenges.

Stan Ellsworth, a 69-year-old Republican retiree in the Kansas City area, said the argument that voting yes means an abortion ban is “crap.”

“I haven’t talked to a single person who wants that,” he said after voting yes early in the Kansas City suburbs. “Most will accept reasonable exceptions and I think the other side knows that’s true.”

White House press secretary Karine Jean-Pierre weighed in on the Kansas vote Monday, saying: “If it passes, tomorrow’s vote in Kansas could lead to another state eliminating the right to choose and eviscerating access to health care.”

The Republican-controlled Legislature has had anti-abortion majorities since the early 1990s. Kansas hasn’t gone further in restricting abortion because abortion opponents have felt constrained either by past federal court decisions or because the governor was a Democrat, like Gov. Laura Kelly, who was elected in 2018.

Kelli Kolich, a 35-year-old Kansas City-area pizza restaurant operator and unaffiliated voter, said she voted no because she believes people have a fundamental right to make their own health care choices and expects a yes vote to “eliminate that right.”

“Women would not have the ability to determine the best choices for themselves,” she said after voting early, as she played with her 18-month-old son.