Lamb set to be No. 1 as injuries mount for Cowboys receivers

Lamb set to be No. 1 as injuries mount for Cowboys receivers 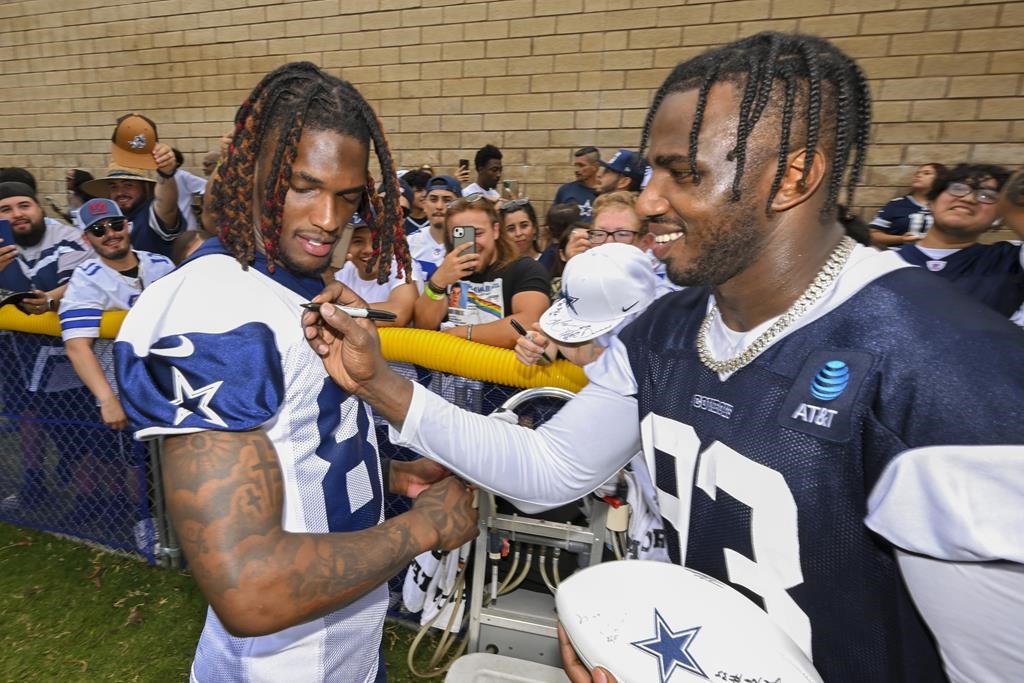 OXNARD, Calif. (AP) — CeeDee Lamb says he’s ready to be the No. 1 receiver for the Dallas Cowboys.

He probably wasn’t thinking he’d be the only one.

Lamb resembles the last man standing a week into training camp after free agent pickup James Washington broke a foot, and with Michael Gallup declaring he won’t be ready for the opener as he continues to recover from knee surgery.

Dallas’ first-round pick two years ago, Lamb is the only healthy receiver on the roster with a touchdown catch in the NFL. And owner/general manager Jerry Jones said Wednesday he didn’t see that changing soon.

“I look strictly at this time in training camp as an excellent time for these young guys to see an opening and see a chance to really get on this roster,” Jones said. “We’ve already been looking ahead and we were going to have trouble cutting our numbers at receiver. Because we like the way some of these guys are starting to show.”

The offseason trade of Amari Cooper to Cleveland in a cost-cutting move cleared the way for Lamb to be Dak Prescott’s top target.

A few days into camp, Lamb said he was prepared to be the focal point, and his game wouldn’t change. After an injury that is likely to sideline Washington into October, Lamb’s answer wasn’t much different.

“I don’t think that changes anything as far as the focal point,” said Lamb, who led the Cowboys in catches (79) and yards receiving (1,102) last season. “Losing a guy like that is always tough.”

The Cowboys signed Washington after the 2018 second-round pick by Pittsburgh had four seasons of modest numbers with the Steelers. He was viewed as a veteran presence as much as anything.

With Washington out for the rest of camp, and headed back to the Dallas area for surgery, the Cowboys still don’t seem inclined to fill the void in experience — for now.

“I think you’ll definitely see these young guys improve with these opportunities, particularly once you get past the install phase,” coach Mike McCarthy said. “As far as veterans and understanding what’s going at each and every position, player acquisition is constant. So if we go that way, it’s to be determined. But it’s not a focus of mine.”

Lamb made a point of noting soon after arriving at camp that he was still close to the youngest receiver in the group (he’s 23) even though he’s going into his third season. He said he’s good either way on adding a veteran.

“I’m never against having help but I like my young guys here now,” Lamb said. “I want to see what they can do in the heat of battle and then we got Tampa in September (season opener). There’s only one way to find out.”

Noah Brown is the next-most experienced receiver — and the oldest at 26, three months older than Washington — but has just 39 catches for 425 yards in five years since the Cowboys drafted him in the seventh round.

Second-year player Simi Fehoko has had some bright spots in the first week of camp, and rookie third-round pick Jalen Tolbert could end up starting.

“We talk about growth. We talk about depth and develop. Here it is. This is what it’s all about,” McCarthy said. “Each and every team that I’ve been a head coach of there’s always some level of projection and growth that has to occur.”

NOTES: The Cowboys might have a tight end shortage as well after rookie Jake Ferguson injured a hamstring early in practice Wednesday while Jeremy Sprinkle was already sidelined with a sore Achilles tendon. McCarthy said he didn’t think either injury was long term. … Dallas hired a new vice president of communications in Tad Carper, who held a similar role with the Cleveland Cavaliers for two decades. Carper replaces Rich Dalrymple, who retired in February a few weeks before a report that the Cowboys paid a $2.4 million settlement to four members of the team’s cheerleading squad. They accused Dalrymple of watching them undress in their locker room during a 2015 event at AT&T Stadium.

Credit: Lamb set to be No. 1 as injuries mount for Cowboys receivers