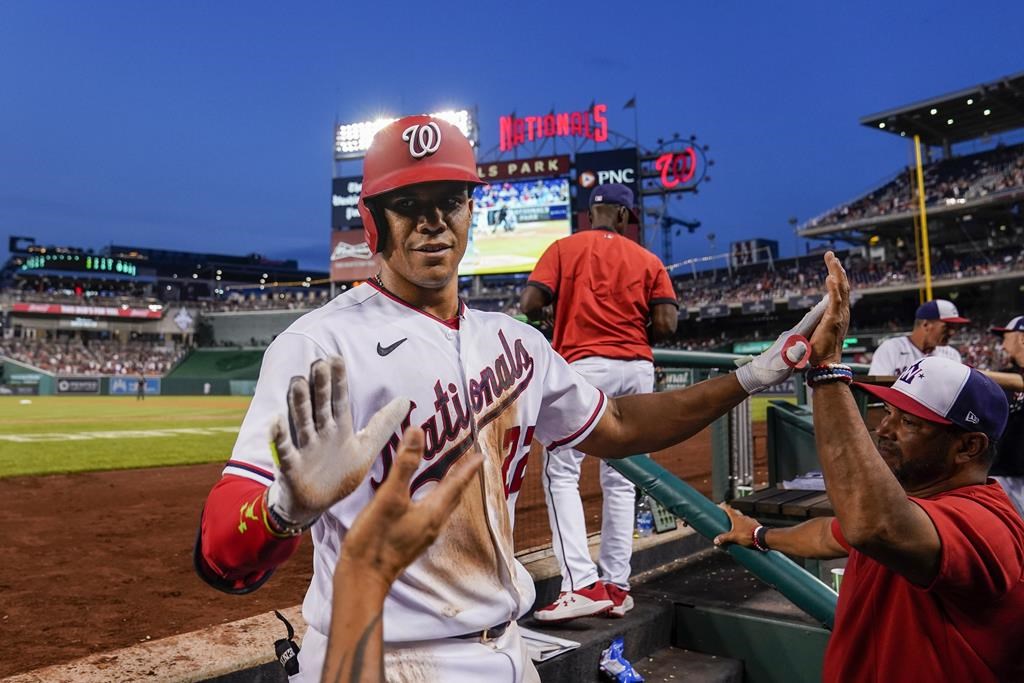 A look at what’s happening around the majors Tuesday:

Soto is the biggest name on the block, with Washington considering bids for the 23-year-old slugger after he turned down a $440 million, 15-year deal to stay with the team. Soto can be a free agent after 2024, and the St. Louis Cardinals, San Diego Padres and Los Angeles Dodgers are considered among the clubs most likely to persuade Nationals general manager Mike Rizzo to unload his franchise cornerstone.

The trade market got busy Monday as several teams made big moves, with the Yankees acquiring Athletics starter Frankie Montas, the Padres picking up All-Star closer Josh Hader from the first-place Brewers, and the Astros obtaining slugger Trey Mancini from the Orioles.

New York Mets ace Jacob deGrom finally returns from a string of injuries to make his season debut in Washington. The two-time NL Cy Young Award winner has not pitched in the majors since July 7, 2021.

“I’m definitely excited,” deGrom said Sunday. “It’s been a long time. This has been a pretty slow process of coming back, so excited to be out there. Nerves haven’t really set in yet, but I’m sure Tuesday I’ll be pretty nervous and I have a feeling it’s going to feel like my debut.”

The 34-year-old right-hander was sidelined the final three months of last season with right forearm tightness and a sprained elbow, then was shut down late in spring training because of a stress reaction in his right scapula.

Even without deGrom, the Mets have spent nearly the entire season in first place in the NL East. They hope his return can help them hold off defending World Series champion Atlanta.

While teams all around the majors were looking to bring in new talent ahead of Tuesday’s trade deadline, the Atlanta Braves locked up one of their own stars for the long haul.

All-Star third baseman Austin Riley and the defending World Series champions agreed Monday to a $212 million, 10-year contract that starts in 2023, the most lucrative deal in team history and a surprise given he had three additional seasons under club control.

The deal with the 25-year-old includes a $20 million club option for 2033 with no buyout, which could make the agreement worth $232 million over 11 seasons.

Riley is earning $3.95 million this year after losing in arbitration. He would have been eligible for arbitration ahead of the 2023, ’24 and ’25 seasons, then could have become a free agent.