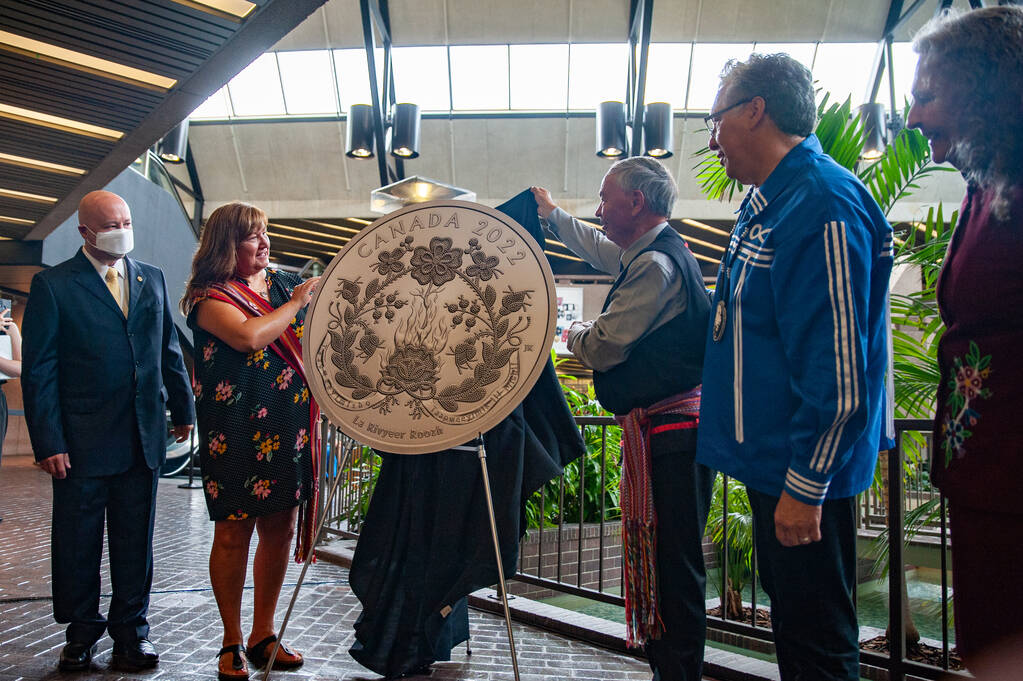 Manitoba’s Métis heritage is being honoured by the Royal Canadian Mint with a new silver coin featuring an intricate beadwork design.

“The coin does tell a story. It tells about (the Métis people’s) birth, our reign of terror (under oppressive Canadian military forces), and right to what we are now,” said Jennine Krauchi, the coin’s designer. “I’m just trying to hold myself together, because there’s certain things about it that are not just for me but for (all) Métis.”

Krauchi, a Métis woman and master beadwork artist, spent more than a year developing the design.

It features numerous Métis symbols, including the infinity sign, a pair of bands representing the Red River, and a prairie rose that symbolizes the resilience of Métis culture. Flames cover the coin’s centre — a reminder of the loss and repression Métis people have suffered, Krauchi said.

The words “taapweeyimisho” and “taapweeyimik lii Michif” are also written on the coin’s base. They translate from Michif, the traditional Métis language, and mean “believe in yourself” and “believe in Métis.”

The coin is the second addition to the mint’s “Generations” series, which annually highlights Canadian Indigenous traditions, artwork and cultures. Both coins in the Generations series contain an ounce of pure silver and retail for around $100.

While they technically have a monetary value of $20, the coins are collector’s items and not made for circulation. The mint has limited the production of each to 5,000 copies.

Krauchi unveiled her design alongside representatives from the Manitoba Métis Federation and the federal government during a Tuesday news event at the mint’s 520 Lagimodiere Blvd. location in Winnipeg.

“Jennine Krauchi has done a remarkable job in telling our story in her design for this coin,” Vandal said. “The traditional symbols and the beadwork speak to us of the pride, passion and the struggle of generations of Métis, and this coin itself becomes a part of telling that story.”

Anita Campbell, MMF minister of finance and human resources, called the minting of the coin “something we are honoured by.”

“Beadwork was done by our female ancestors and is a strong legacy that showed their presence and influence on our culture. It was a profound act of love,” Campbell said. “We are a distinct nation, with a distinct culture and a distinct history, and sharing this knowledge widely is something we feel very strongly about.”