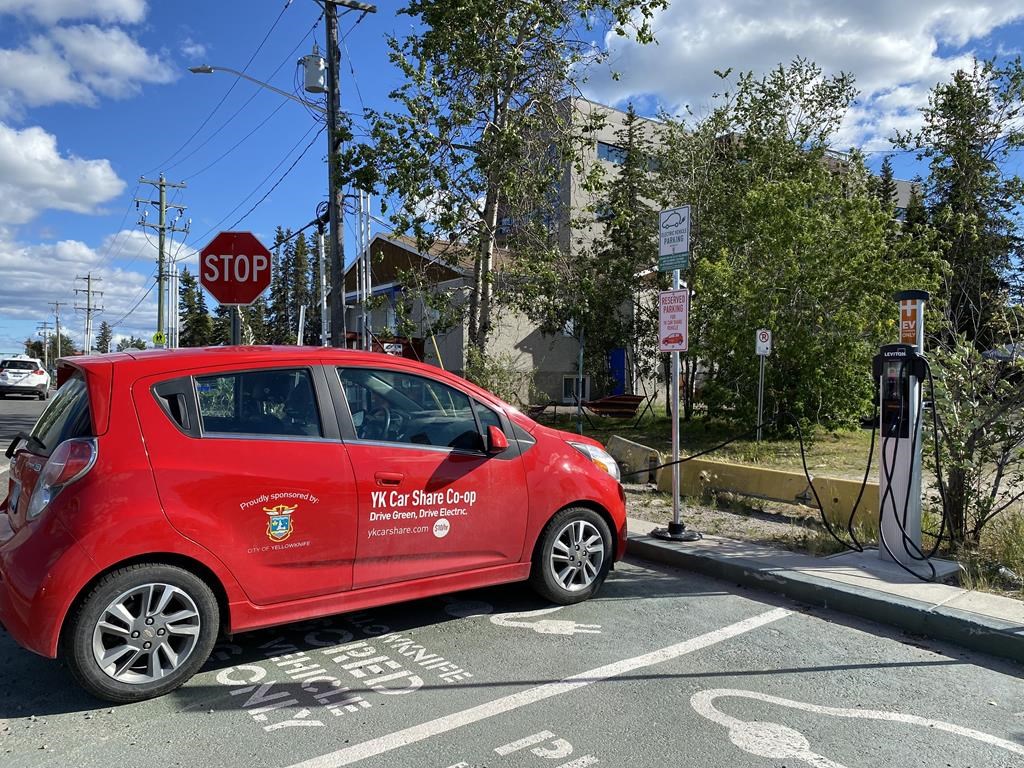 YELLOWKNIFE – Electric vehicles are a rare sight in Canada’s North, with challenges such as frigid winter temperatures and limited infrastructure.

The Northwest Territories is hoping to change that.

The territorial government plans to develop a vehicle-charging corridor between the Alberta boundary and Yellowknife to encourage more residents to buy electric vehicles to reduce their carbon footprint.

“There will soon be a time in which not having electric charging stations along the highway will be equivalent to not having gas stations,” said Robert Sexton, director of energy with the territory’s Department of Infrastructure.

“Even though it does seem right now that there’s limited uptake of electric vehicles and some of the barriers seem sort of insurmountable, we have to plan to start doing this, because in five years’ time, it’ll be too late.”

The federal government has committed to a mandatory 100 per cent zero-emission vehicle sales target by 2035 for all new light-duty vehicles. It has set interim targets for at least 20 per cent of sales by 2026 and 60 per cent by 2030.

A study commissioned by the N.W.T. government forecasts electric vehicles could account for 2.9 to 11.3 per cent of all annual car and small truck sales in the territory in 2030.

The study estimates the planned charging corridor, alongside electric vehicle purchasing incentives, could reduce greenhouse gas emissions by between 260 and 1,016 tonnes of carbon dioxide equivalent in that year.

Sexton said it will likely take a few years before the charging corridor is complete. As a start, the territory recently awarded up to $480,000 to the Northwest Territories Power Corporation to install a Level 3 electric vehicle charger in Behchoko.

The N.W.T. government projects the charging station will reduce gasoline use by 61,000 litres and decrease carbon dioxide equivalent by up to 140 tonnes per year. It is scheduled to be complete by the spring of 2024.

There are other initiatives to grow the number of electric vehicle charging stations in the North.

The federal government earlier this month announced $414,000, along with $56,000 in territorial funding, to install up to 72 primarily Level 2 electric vehicle charges in public places, streets, multi-unit residential buildings, workplaces, and facilities with light-duty vehicle fleets in the N.W.T. by March 2024.

In Yukon, the territory has pledged to develop electric vehicle infrastructure in all road-accessible communities by 2027. It has already installed 12 electric vehicle chargers with seven more planned.

Just a few people in the N.W.T. currently own electric vehicles.

Patricia and Ken Wray in Hay River have owned a Tesla Model 3 for three years. Comparing added electricity costs with savings on gasoline, Patricia estimates they spend 60 per cent less to keep the Tesla running compared to a gas-powered vehicle.

“I don’t mind driving past the gas station,” she said.

Despite some initial hesitation about how the car would perform in the winter, Wray said she hasn’t had any issues with her Tesla when it’s -40 C, although it does take longer to charge. She added it “really hugs the road” in snowy and icy conditions.

“People in the North need to understand these cars are marvellous in the winter,” she said.

Wray said while she and her husband drive their Tesla regularly, it’s not feasible to drive long distances across the territory. As the number of electric vehicle charge stations increases across the N.W.T., however, that could change.

“I’m just very, very happy to hear that charging infrastructure is now starting to be put in place,” she said.

Andrew Robinson with the YK Care Share Co-op is more skeptical about the potential success of a long-distance charging corridor. He said while government support for electric vehicles is positive, he believes there’s a more immediate need to focus on uptake within N.W.T. communities. He pointed to local taxi services as an example.

“It’s a long stretch,” he said of the drive from Alberta to Yellowknife. “It’s 17 hours of hardcore driving and when you throw in having to recharge, anything that makes that longer, people are not going to be really into that.”

The car sharing service, which has a 2016 Chevy Spark dubbed “Sparky,” states on its website that a Level 2 charger can usually recharge a vehicle within six to eight hours while a Level 3 charger takes approximately half an hour.

This story was produced with the financial assistance of the Meta and Canadian Press News Fellowship.