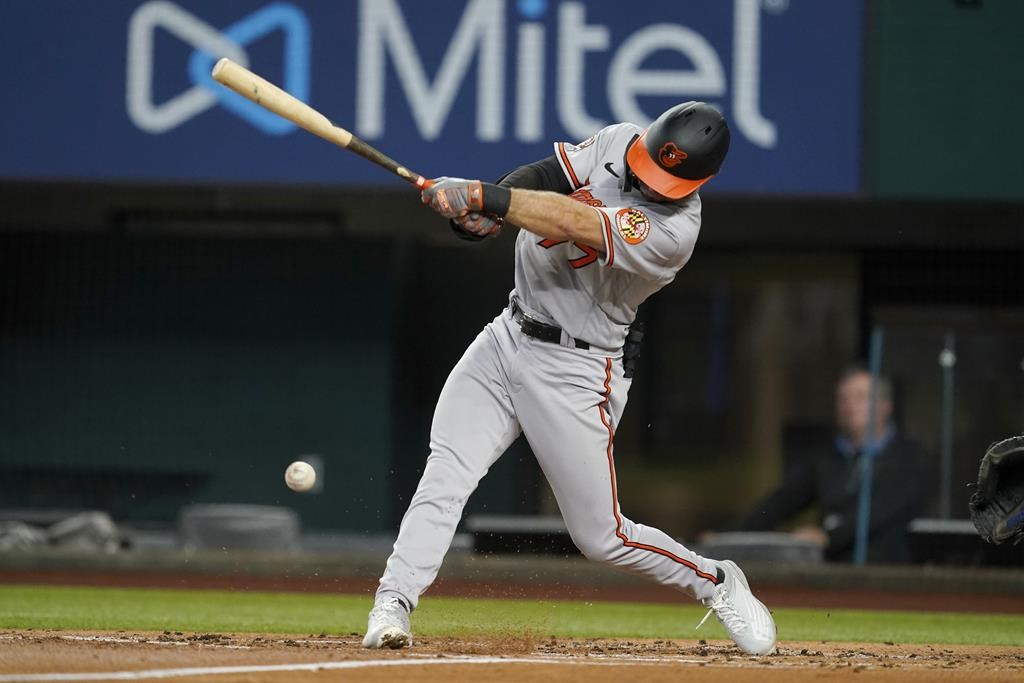 ARLINGTON, Texas (AP) — Cedric Mullins homered leading off Baltimore’s first game without Trey Mancini, Anthony Santander extended his hitting streak to 12 games with an RBI single and the Orioles matched their 2021 win total with a 7-2 victory over the Texas Rangers on Monday night.

Hours after the Orioles traded their longest-tenured player and fan favorite, with Mancini going to Houston in a three-team deal, they won their 52nd game to get back over .500 and within 2 1/2 games of the American League’s final wildcard spot. Baltimore was 52-110 last season.

Spenser Watkins (4-1) struck out five without a walk over six innings. The only run allowed by the right-hander was on a solo homer by Corey Seager in the sixth inning.

Seager’s 24th homer came after he missed three games because of a contusion after fouling a ball off his lower right leg last Thursday. The All-Star shortstop returned to the lineup as the designated hitter

Rangers starter Jon Gray (7-6) exited with the bases loaded and one out in the second inning because of discomfort on his left side. He looked uneasy after Santander swung and missed on a pitch in the dirt to make the count 1-2. The right-hander walked around the mound and then left after a brief visit from an athletic trainer and manager Chris Woodward.

Santander hit a high popup to shallow right on the first pitch thrown by reliever Jose Leclerc, and the ball dropped between two defenders to drive in a run. Ryan Mountcastle followed with another RBI single for a 4-0 lead, and he added an RBI double in the fourth.

Mullins put the Orioles ahead to stay with his 14th career leadoff homer, and third time this season. The opposite-field shot was just over the wall and just inside the pole in the left-field corner. Mullins scored three times.

Mancini hit .268 with 10 homers and 41 RBIs in 92 games this season, making 51 starts as the designated hitter with other games at first base and in the outfield. He broke into the majors with Baltimore in 2016.

The Orioles got back two prospect pitchers, one from Houston and another from Tampa Bay.

Terrin Vavra opened the Orioles second with an infield single for his first career hit. After second baseman Ezequiel Duran made a fielding error on a potential inning-ending double play grounder, Mullins had an RBI single and Adley Rutschman walked before Gray faced Santander.

Gray struck out three and walked one while allowing four runs (three earned) in his 1 1/3 innings. He signed a $56 million, four-year contract with the Rangers in free agency last winter, and was their starter on opening day.

Nick Solok hit a pinch-hit solo homer in the eighth for Texas, which is 0-4 against the Orioles this season.

Rangers: Gray had stints on the injured list after each of his first two starts this season — right middle finger blister and left knee sprain). But he had gone 6-2 with a 2.96 ERA over his previous nine starts going into Monday night.