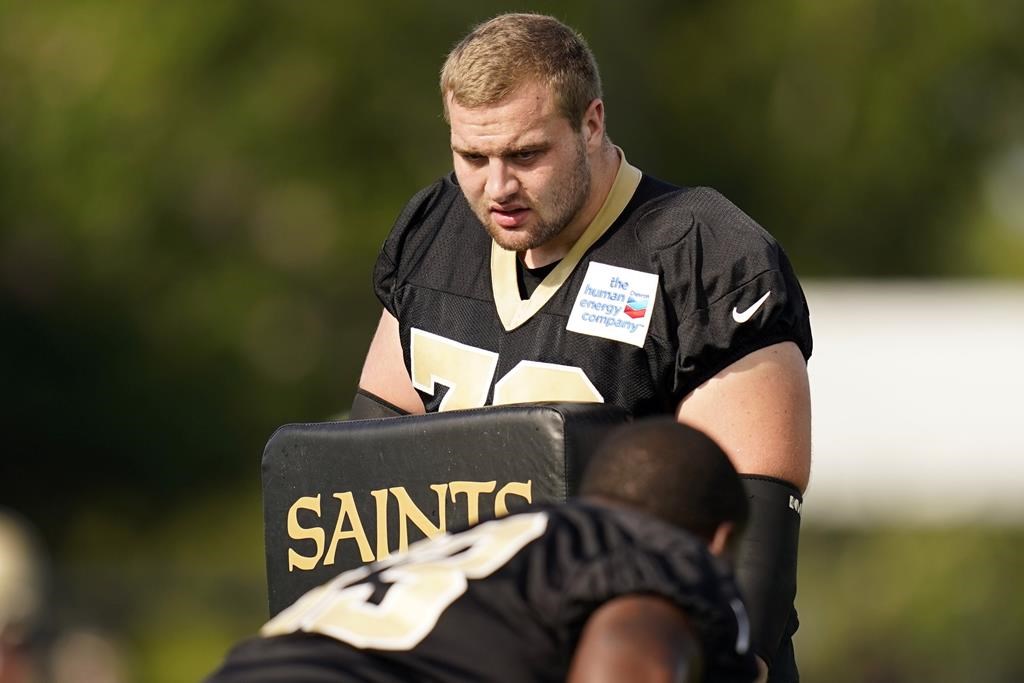 “When you think he’s done, he’s not done,” guard Cesar Ruiz said after a training camp practice Tuesday, when he compared Penning to a pit bull. “He definitely has that finishing mentality that you love in offensive linemen.”

The 6-foot-7, 325-pound Penning, a left tackle out of Northern Iowa, is earning respect from fellow offensive linemen — and showing he can cause defensive players to loose their cool.

Penning has been at the center of a couple brief, after-the-whistle skirmishes this week, starting on Monday when he exchanged blows with second-year defensive end Payton Turner and veteran end Taco Charlton.

“It’s nice having someone who comes in that has that dog mentality and is just angry as soon as they step on the field,” Saints veteran center Erik McCoy said of Penning. “It kind of boosts the meanness of the whole group.”

Penning was unapologetic about his brief dust-up, but didn’t fault Turner, either.

“That’s how I’ve always played the game; to me, that’s just how it’s meant to be played,” Penning said. “I’m not going out there to start a fight or anything. But things happen.

“The finishing ability — that’s what I pride myself in,” Penning added. “That’s always going to be part of my game.”

It remains to be seen if Penning, drafted 19th overall, will start as a rookie. He’s competing for playing time with veteran James Hurst, who served last season as a versatile backup and became a spot starter at multiple spots on the line, depending on the overall health of the unit.

Hurst has been getting the bulk of first-team snaps at left tackle, Penning gets a few as well.

Penning has “got all the talent in the world,” Saints offensive line coach Doug Marrone said. “We’ve just got to continue to lay the foundation with him.”

Penning is also trying to become the latest small-school prospect to play a major role in New Orleans. Northern Iowa is in the second-tier Football Championship Subdivision of college football. But the Saints have a track record of turning small school prospects into contributors.

Terron Armstead, who started at left tackle for eight-plus seasons before leaving in free agency last offseason, was a third-round draft choice out of FCS-level Arkansas-Pine Bluff.

Retired right guard Jahri Evans, now serving as a coaching intern during Saints training camp, was a fourth-rounder out of Division II Bloomsburg, started 11 seasons for New Orleans and made six Pro Bowls.

Jermon Bushrod was a fourth-rounder out of Towson (FCS) who started four seasons at left tackle for the Saints, including on their 2009 championship team, before moving on in free agency to Chicago and Miami, where he also occupied starting roles.

If small-school prospects “haven’t dominated” in college, “to me that’s a red flag,” Marrone said. “Jahri dominated, Bushrod dominated. Trevor dominated. … One thing I think has always been great about this organization — we have no problem taking a player and putting him in there if we think he’s ready, no matter where they come from.

“As long as someone is hungry and they have that little chip on their shoulder … you have a chance,” Marrone said.

While Marrone said he doesn’t want Penning to scuffle habitually or hurt the team on game days or in practice, he doesn’t want to dial back the rookie’s intensity, either.

“There’s a fine line to it,” Marrone said. “We don’t want to take the bite out of this guy. But we’ve got to be smart about it, too.”

Notes: Tight end Taysom Hill missed his fourth straight practice since taking a hit to the ribs last Thursday. Safety Tyrann Mathieu has yet to report as he continues to work through a “personal matter” for which he’s been excused. … Second-year linebacker Pete Werner practiced on a limited basis after coming off the non-football injury list early this week with what Werner described as a “problem with my groin.”

urns into a lot motivation.”