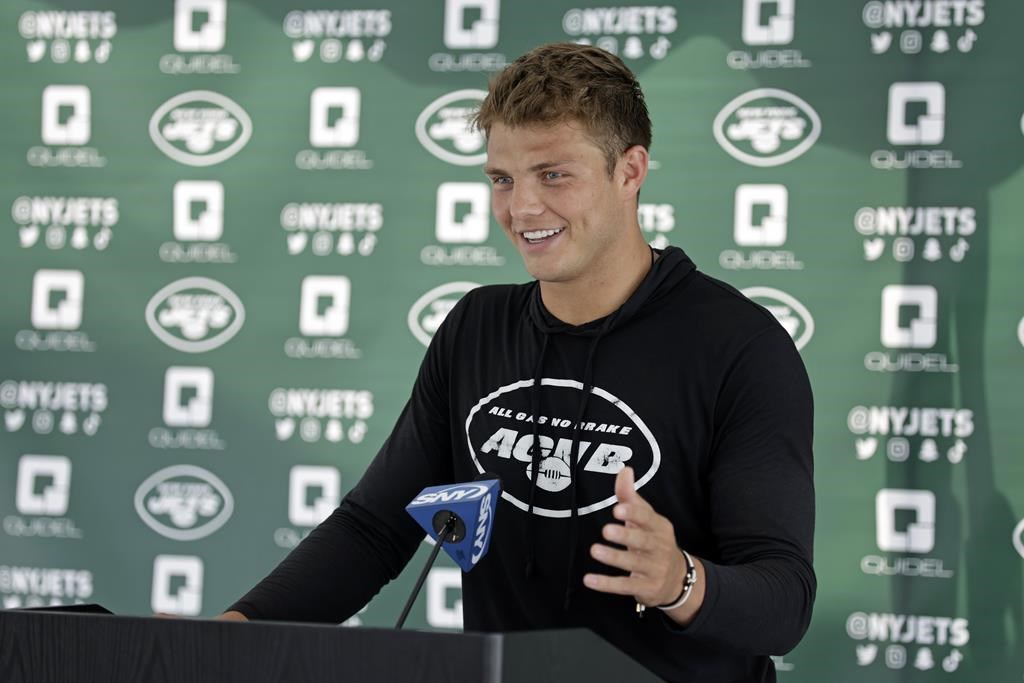 FLORHAM PARK, N.J. (AP) — Zach Wilson knows what comes with the territory of being an NFL quarterback, especially one in the New York area.

With such a large media presence and massive fan base, every throw on the field — even in practice — and each move off it is scrutinized. So how does the soon-to-be 23-year-old Jets QB handle all the chatter?

“Who’s scrutinizing?” Wilson asked with a wry smile. “I mean, I’m sorry — I don’t read any of you guys’ stuff. It’s only (Joe) Flacco that scrutinizes me — in our ping-pong tournaments we’ve got going on outside of this.”

Wilson has a simple way to deal with it all: He deletes all the social media apps from his phone before training camp.

“I mean, I’m not a big social media guy,” he said. “I don’t have access to that kind of stuff. I keep my mind here with the guys and in the playbook and with our coaches and learn from what those guys are telling me.”

That’s right. No tweets, Facebook posts or Instagram videos and photos for Wilson until after the season ends.

“I want to be locked in on what’s going on on our field and in our meeting rooms,” he said.

Wilson said he started deleting his social media apps before camp while he was in college at BYU. He has what he calls his “social media team” that helps post things, if needed.

“They’ll send me content — ‘Do you want to put this up or that up?’” Wilson said. “I generate stuff with our guys on our team, like, ‘Hey, I think that would be cool to post or show off so-and-so.’ But really when it comes down to just reading things, I don’t ever get into that stuff.

“I don’t ever just scroll down social media.”

Wilson is in an unique spot, though, because he regularly trends for his football exploits, of course. But he also ended up buzzing on the gossip pages during the offseason for rumors about his dating life. His mother Lisa is also a popular personality on Instagram, with more than 119,000 followers.

“For me, it’s just comes to limiting what voices I really need to hear,” Wilson said. “And right now, it’s hearing what my coaches have to say, what the other quarterbacks have to say and really, my teammates and what we’re thinking every single play.

“Even parents can sometimes be a distraction.”

Sorry, Mom and Dad. There are no “dislike” buttons yet.

NOTES: RB Michael Carter was held out of practice with what coach Robert Saleh called a minor ankle issue. Carter is day to day with the hope he’ll be back on the field later this week. … DE Vinny Curry is sidelined with a hamstring injury. … LT George Fant participated in a few plays during team drills for the first time this summer. He’s working his way back from offseason arthroscopic knee surgery.